RECOMMENDED
Brigadoon and Finian’s Rainbow both opened on Broadway in 1947.  Both had successful runs, Brigadoon playing 581 performances, Finian’s Rainbow beating it with 725.  Both were jam packed with hit songs.  From Brigadoon, you’ve probably heard the title song, Almost Like Being In Love, Come To Me, Bend to Me, and The Heather on the Hill. Finian’s Rainbow hits include How Are Things in Glocca Morra?, Look to the Rainbow, Old Devil Moon, and If This Isn’t Love.  Both shows featured Irish lead characters, and each became a major movie musical, Brigadoon starring Gene Kelly and Finian’s Rainbow starring Fred Astaire.  Broadway musicals don’t have better credits than these. 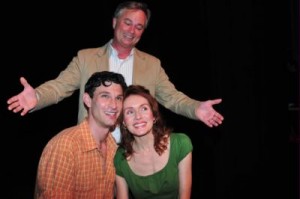 So how come Brigadoon gets revived again and again and Finian’s Rainbow rarely ever?

Musical Theatre Guild’s beautifully performed concert staged reading of the Burton Lane-E.Y. Harburg Broadway hit makes it clear why none of our local CLOs are ever likely to mount a major revival of Finian’s Rainbow.  Unless someone can come up with a better book than the one Harburg and Fred Saidy wrote back in the 1940s, Finian’s Rainbow is likely to linger mostly in obscurity despite having an absolutely glorious score chock full of hits.  The tale of a a heavy-drinking Irishman’s visit to the fictional state of Missitucky, accompanied by his comely daughter and a too-cute Leprechaun, is more Li’l Abner than Oklahoma!, but mostly without Al Caap’s satiric genius. Ironically, the supposedly “racist” scenes (those dealing with a bigoted Southern Senator), the very scenes which have gotten the show a bad rep, these end up being the best part of the Finian’s Rainbow, and prove the book-writing duo to be decades and decades ahead of their time. More on that later.

What MTG’s production does have is an abundance of talent, Broadway-class performers who make even revivals of minor shows treats to watch and listen to.

Under Gary Gordon’s assured direction. Finian’s Rainbow offers the ever charming Reece Holland in comically drunken mode as Finian the eternal dreamer, the perky Maura M. Knowles in all her red-headed Irish glory as Finian’s daughter Sharon, dashing Damon Kirsche in countrified mode as leading man Woody, and impish Richard Israel as Og the Leprechaun. The latter three get the bulk of the hits, Knowles’ lending her lovely soprano to “How Are Things In Glocca Mora,” dueting with leading man extraordinaire Kirsche in “Look To The Rainbow” and “Old Devil Moon,” and with the always te(nor)rific Israel in “Something Sort Of Grandish.”  Israel gets to solo “When I’m Not Near The Girl I Love” and managed to triumph over a case of a hoarse throat at Monday’s performance. (Talk about being a pro!)

Winning the biggest ovations, and loudest laughs of the evening, are the company’s African American contingent. (Finian’s Rainbow is to be saluted for having had an integrated Broadway cast decades before blacks and whites appearing on the same stage became matter of course.)  Whoops and hollers and cheers greeted Melony Collins, Carly Turner, and Natalie Wachen for their thumb-snapping, soulful R&B harmonizing in “Necessity” and S. Marc Jordan, Christopher James Culberson, Dion Mial, and Arthur L. Ross for the infectious gospel rhythms of “The Begat.” 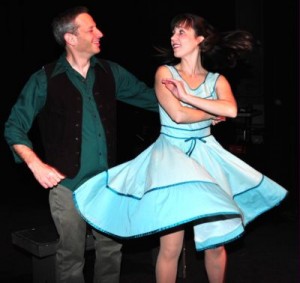 Finian’s Rainbow’s most interesting and still relevant plotline concerns Jordan as segregationist Senator Billboard Rawkins who gets “wished” from white to black, thereby allowing the book writers to comment on race relations in a way that was unheard of in the late 1940s, almost ten years before a woman named Rosa Parks refused to give up her seat in the front of the bus. In the show’s most hilarious sequence, Mial is instructed how to “shuffle” and “talk colored” when bringing the Senator a mint julep, a spot-on comment on the way African Americans were forced into racial stereotypes on stage and in the movies, and wait till you see Mial get his “revenge.”

Jordan gives another memorable performance as Senator Rawkins, as do Roy Leake, Jr. as Buzz and Chuck Bergman as the Sheriff. In a concession to the “staged reading” nature of the production (with sets verboten per Actors Equity), narrator Paul Keith reads stage directions and scene descriptions as if he were telling a fairy tale to a quartet of adorable, precocious moppets: John Duffy, Benjamin Holtzman, Delaney Miller, and Wendi Motte. Completing the fine ensemble are MTG stalwarts Gordon Goodman, Pamela Hammil, Shauna Markey, and William Martinez.

Karen Nowicki, one of our best young choreographers, not only created several jigs for the ensemble but does absolutely lovely work as Woody’s sister “Silent” Susan, who communicates through dance. Impeccable musical direction is provided by pianist conductor Ed Martel and pianist David Black, using the scaled-down dual piano orchestrations created for the 2004 Irish Repertory Theatre off-Broadway revival.

Musical Theatre Guild’s five yearly concert staged readings continue to provide Angelinos with the only chance to see rarely performed shows like Finian’s Rainbow. Their just announced upcoming season is an especially exciting one, as it salutes “forgotten” gems of the 1960s: Stop The World—I Want To Get Off, High Spirits, Fade Out/Fade In, and Irma La Douce.  Next up, the challenge of Kiss Of The Spider Woman, followed by Violet, a 1998 off-Broadway musical by the composer of Caroline, Or Change. In the meantime, there’s one more performance of Finian’s Rainbow in Thousand Oaks on Sunday.  It’s not the greatest show in Broadway history, but it’s not the worst either, and in MTG’s capable hands, becomes an entertaining way to spend a few hours in the presence of some of our finest musical theater talents.